The almost-Great Depression is a reality. 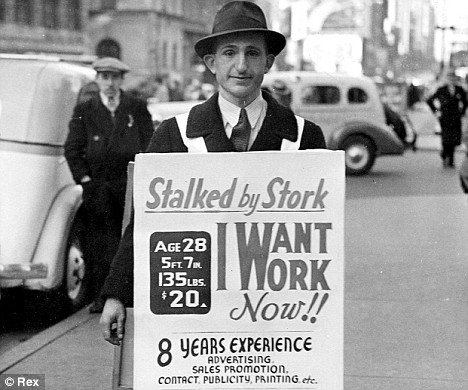 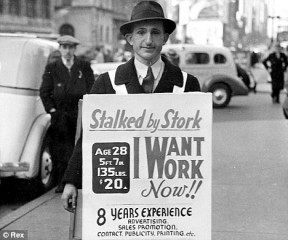 Bad old days: A jobseeker adopts the same strategy in New York during the Great Depression

How many of you have noticed, as I have, how incredibly bad off a lot of people are right now? I mean, it’s easy to ignore if you want, and god knows lots of people do, but WOW!, it’s really getting ugly out there. (If you don’t see it, are you blind?)
As an artist, one thing I try and do is observe. As a meditation practitioner, the same applies. Pay attention. Slow down. Look around. I have come to see how important that is, and yet how challenging to make happen. There’s always the joys of objects, stuff, toys, electronics – all those things we have to keep us distracted. The internet, which is so amazing and so reductive at the same time. You can hear the sucking sound that’s left at the end of a day spent with electronics as one’s primary connection to the world. Weather? What weather? 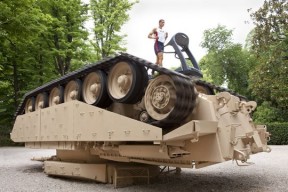 On that note, I must digress here for a moment. If anyone wants to know why people are so complacent right now, just look to the distractions. Why revolt, protest or otherwise get off our asses. It’s easier to just turn on the tv, the internet, your phone, whatever you want and all the emotion gets dissipated in the moment and the motivation goes away. Seriously. We have been lulled into a state of complete submission (to a large degree) by the stuff we have. Between the new found acceptance that if we’re not working 18 hours a day, something is wrong with us and the desire to escape that mode, there is little time or energy for marching on Washington. We can barely manage the mall on the weekends. Add to that the aging Baby Boomers, who were behind so many of those marches, and it’s a miracle anyone does anything more than write in a response to an “I’m mad as hell and I’m not going to take it anymore” email. Forget shouting out a window. That’s too much work.
So, there are the toys – the bits and bytes that keep our focus off of moving our asses and instead, on sitting in air conditioning somewhere, believing that ‘being’ is ‘doing’. And then you top that off with a dramatic bad US and world economy (the Chinese aside)  and what do you get?  Depression.  The reality of what’s out there on a daily basis sucks the air out of your lungs the way a sucker punch does. If you don’t believe me or aren’t aware of it, forget what they say on TV or in the paper and go for a walk in any major, or better yet, minor city in this country. That’s a lesson and a half in where we really are. Leave the core areas of New York, Boston, San Fransisco and Chicago out of this. Try Syracuse, San Diego, Atlanta. How about Detroit, Birmingham? 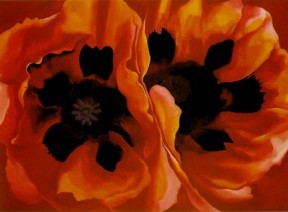 There are blocks of half or full empty buildings and store fronts. There are entire neighborhoods of new or old homes that are in some state of abandonment. What were once thriving residences where people lived and worked, laughed, cried and buried their dead are now, themselves, in some serious state of decay or death. I know that sounds all very dramatic but let’s stop kidding ourselves. The ability of our consumer culture to provide us with insulated environments with rose colored windows (aka – iPads, Smartphones and the ubiquitous TVs) has not stopped the decay. It’s simply hid it out of view.

I spent the weekend in Philadelphia. It was a distraction of the old-fashioned kind – hanging out with friends, walking the river and the streets of the City, sitting at cafes, visiting the Museum and having an amazing dinner, once again, at Alma de Cuba. You remember, the kind of thing people did for distraction and relaxation before they started avoiding the ‘real’ in favor of avatars and sound bites. Walking the streets of Philadelphia you could easily believe the Great Depression was back, or never left, except for the large towers that stand head and shoulders over the City Hall. (They weren’t there back then.) 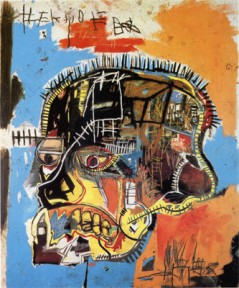 Untitled acrylic and mixed media on canvas by Jean-Michel Basquiat, 1984

There are so many empty store fronts, condos, and buildings of all kinds that I was struck by how the City is managing at all. One block feels just fine full or cafes, bars, restaurants that one presumes to be full apartments or offices. But go another block east or west, north or south and OMG, real devastation. It’s not the Beirut kind but the Great Depression kind certainly. It was awe-inspiring, but not in a good way. It’s subtle, though, like much of the poverty in the US. Hidden in plain view so that those of us who prefer not to look, don’t have to. I’m not saying Philadelphia is any better or worse than other cities. It just happens to have been where I was.

I was there with a friend, one of those lifetime kinds of friends that you can’t believe you’ve know for so long. She and I went to college together and in the process connected in a way that meant we would stay friends forever. Sadly, she has been struggling with ovarian cancer for almost five years. That makes her a survivor and if you were to ever meet her, you would say “Absolutely, she’s a survivor.” But truth is, if the cancer isn’t trying to get her, the chemo is. It’s like playing Russian roulette over the course of months and years. The cancer builds up and then you shoot at it with chemo. The wounds from the chemo almost kill you while trying the kill the cancer. Then, while you stop the chemo to recover, the cancer gets to grow again, like snakehead fish invading from a foreign land that no one here knows really how to stop. 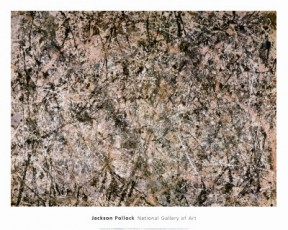 For me, this has been a lesson in what it means to see things as they are and try to be ok with it. The problem is, I’m not ok with it. It’s tragic on a grand scale – both the battle my friend is undergoing to stay alive and the battles so many in our country and the world are facing trying to manage to eat and live each day.
We all knew the run up in stocks before the bubble burst in the early 2000’s, followed so quickly by the housing bubble, was not going to be a good thing. There is a balance and it does seem that when the pendulum swings too far one way, it has to go equally as far the other way before we achieve equilibrium. Nonetheless, the suffering is vast and deep and no where near over and we, the sedated, distracted and over-worked, need to really start looking around.

As artists, as people, we need to own up to our responsibility for all this. Everyone has some culpability in how this came about. Each one of us bought into the fast and easy life we imagined was real, all the time having that little tickle in the backs of our minds saying, “This ain’t right.”

Now, we see the results, with more to come.
We can, I can, help to make this better. We can bring out in our art and in our lives those things which really make a difference. We can stop pretending that letting others (the politicians, the bankers, the priests and spiritual guides)  take care of it is working. We can stop waiting for the next messianic leader to come along and fix our problems (that goes bad many more times than it goes well). And we can reach out to our neighbors, our families, our friends and to the people we don’t even know and we can offer a hand. Help with fixing, help with paying for things, help by listening.
And as artists, we can look to a different way to make a difference. The work needs to connect with the world in a more meaningful way and not just cater to an aesthetic of wealth and elitism. The power of so much work earlier in this century was that the artists making it believed in its ability to influence and transform. They lived through and/or with depression, Great and small, and they saw how each work of art could contain something significant that influenced people to think bigger than themselves. We must recapture that mentality, that compassion and that connection to help this country regain its footing, and its faith in itself. Narcissistic, self-serving, grandiose works developed for weathy patrons and isolating museums can do nothing but perpetuate the decline and decay of us as a culture and subsequently our cities and our society. Pretense is nothing more than emperors new clothes.
I wait with open arms and bated breath for the day when we can look back at this period in American, and to some degree world culture and say, “Wow, I’m glad that’s over. I hope we don’t repeat that for a long time.”
About the images: many artists have suffered depression to varying degrees during their lives, some to sad and tragic ends. Nonetheless, the works produced can often be argued to have been some of their best. Depression gives us a chance to rebuild ourselves and allow genuine creativity flow like a river that’s been released from a dam. We have a chance to harness that same energy on a broad scale and see it blossom into an amazing new spring.  WIth the exception of the photograph at the top, which is from the Great Depression era and the Allora & Calzadilla photo, each of these works is by an artist who had to deal with some serious depression in their lives.