On R.Mutt, the Duchamp Urinal and my new installation, “Picnic in the Rain.” 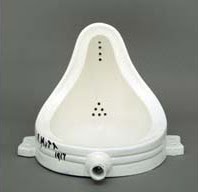 A month after the now infamous urinal by R. Mutt (Marcel Duchamp) was rejected by the exhibition he had submitted it to, a little magazine called The Blind Man, which was co-edited by Duchamp, defended Mr Mutt’s Fountain: “Whether Mr Mutt with his own hands made the fountain or not has no importance. He CHOSE it. He took an ordinary article of life, placed it so that its useful significance disappeared under the new title and point of view – and created a new thought for that object.”

I was reading this recently on a blog post from last year by Jonathan Jones (for any friend, no, not ‘that’ Jonathan Jones!). His article about this very famous work and quote made me fully realize just how much his assessment of Duchamp’s influence as well as Duchamp’s statement applies to my work as well, almost 100 years later. To quote Jones’ article:

“How did he come up with such a notion? This, it seems to me, is the question no one asks about Duchamp. His big idea – that any ordinary “readymade” object can be chosen by the artist as a work of art – has sunk so deep into modern culture that he is imagined almost as a biblical prophet, a remote figure of authority. It’s as if contemporary art history begins with him. Art is steeped in tradition – today, there is a tradition of the readymade – and to make a painting, a film, a photograph is to know you are contributing to a form that has been shaped and defined by predecessors. Even the most radical film is a film. But Duchamp did something for which there was no precedent. Love or hate the art that claims him as ancestor, you can’t deny the originality of the thought itself, which I suspect was all that mattered to Duchamp.”

Why do I bring this up in relation to my own work, especially my newest work, “Picnic in the Rain”? Because this is completely and entirely true of how I arrive at what I call my art work. No, I don’t make readymades in the same way Duchamp did. But, yes, I do very much decide on calling things art that are no ‘made’ by me. In fact I find I’m attracted more and more every day to things that come to me wholecloth. They are complete without my interaction. So of course I muck around with them. I put my ‘stamp’ on them in some way, which lately has been an exploration of what perception really means and how our lack of personal time, of real experienced time prevents us from seeing. Nonetheless, I reach further and further into the place that Duchamp opened up for us, a place where a sense of complete genuineness arises out of less ‘trying’, less doing, rather than more. I’m convinced now that this is in part the reason why so much contemporary work feels tired to me. It is completely overworked to the point of exhaustion. The more one does to something the less it feels original. It just feels clever and frankly I’ve seen enough clever in my life that I can do without any more.

So, here’s to Duchamp and his brave leap, his philosophical discovery and maybe the road into a simpler, more open space.