What Michelangelo, Raphael and Manet have in common. 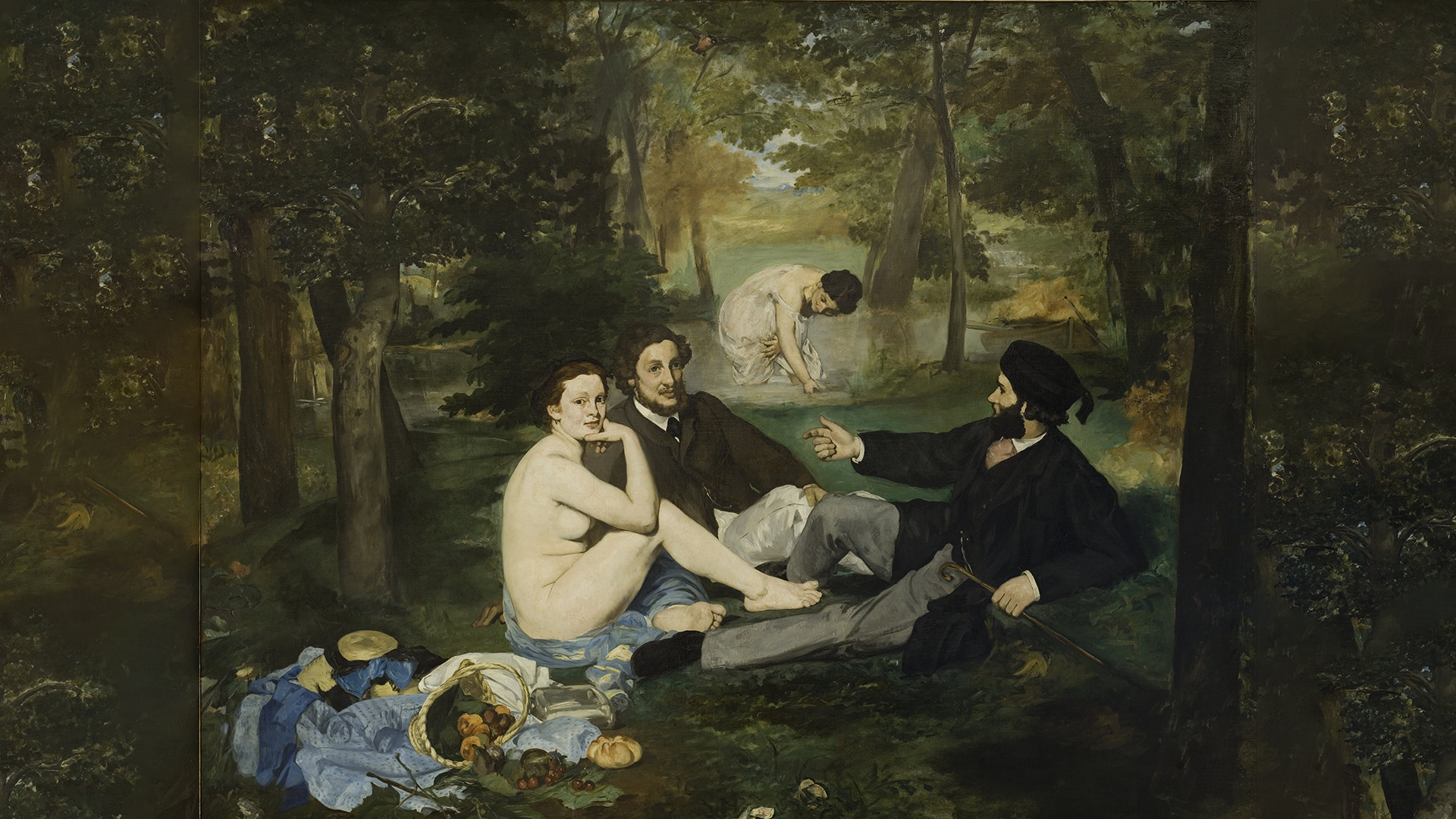 As I’m finalizing all the pieces for my new work, Le Dejeuner sous la Pluie, I have been spending a great deal of time with the Manet work, Le Dejeuner sur l’Herbe, something I commented on in earlier posts. During this time I found that Michelangelo was the likely source for one of the key figures in the painting.

As part of my deconstruction of Manet’s painting, I needed to refresh myself on why it became so famous (what it comes down to is that Parisian society at the time considered the nude female to be a whore because of her frankness sitting naked with two men). As is well documented at this point, the central three characters in Manet’s painting are an almost direct quote from a no longer extant Raphael work. We know what this work looks like because Raphael had a series of prints made of his work by the master printmaker Marcantonio Raimondi. The Raimondi print still exists.
So, let me digress for a moment. In reading about this relationship between Raimondi and Raphael, I am inclined to believe that the ‘missing’ Raphael may never have existed, at least as a final work. It seems to be possible and even likely that Raphael had these prints made to be final works and not necessarily just as copies of other things. If there was anything, there was a sketch rather than a full on painting.

Well, the idea here has been all along that Manet was copying the Raimondi and thereby channeling Raphael in order to ‘thumb his nose’ as it were at the Salon members and critics of his time. As today, there was this standard by which all things were supposed to be judged and that standard held the great masters as everything that was considered ‘best’ in art with some key alterations for then contemporary society. I know this is pedestrian knowledge to many but I continually find the parallels interesting. (Once again Duchamp comes to mind!)

Well, in looking and relooking at the Manet, then the Raimondi/Raphael, it suddenly dawned on me where I’d seen the lounging male figure before – Michelangelo’s Sistine ceiling. Has anyone else see this very obvious quote? It raises such interesting questions. What came first – Raphael or Michelangelo? Was this some sort of cross work tribute between these two Renaissance greats? It’s fascinating to think that one of these men, or both perhaps, would have employed such as obvious figure in their work. And it certainly gives real credibility to the recognition of the greatness of the work.

I’m going to venture an educated guess here the the original was the Michelangelo. Raphael was much younger and would certainly have been seriously influenced by Michelangelo’s work. It does make me wonder if this in any way contributes to the reason there is no Raphael original of this work.
And finally, what of Manet? Did he realize he was copying Michelangelo is part? It makes his accomplishment even more tongue in cheek as he incorporated knowingly, or not, a piece of one of the most important western paintings into his rejected work. I can imagine him smiling to himself the whole time. How smug and wonderful he must have felt when it became such a sensation.
What for Manet was a way of saying, “I’ll show you” became an institutionalized process by which art and artists get recognition. Whether it’s Manet in 1863 or the Sensation show in London in 1997 or whatever is shocking people today, infamy in art trumps educated understanding and talent. Aesop could very well have been referring to the artworld in “the Boy who Cried Wolf”. Only in this case the wolves have already eaten the heart out of art and left us with (mostly) just commodity.