Jeff Koons, Peter Paul Rubens and the kitsch of the Neo-Baroque 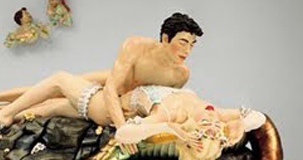 There is a wonderful series on Public Television called “ART:21” that I recently started watching (ah, the wonders of Hulu!). This particular series seeks an in-depth investigation into the why and wherefores of contemporary art of all kinds. A portion of a recent episode profiles the working on the famous and infamous Jeff Koons. I mean, if you’re a visual artist who doesn’t live in a cave somewhere, you know who he is.

The piece starts out in and develops a full dialog with the myriad assistants in Koons’ studio, and let me say he has a studio. When I used to hear about artists’ studios, I imagined there were a couple assistants who worked on the ancillary components, such as stretching canvas, mixing paint, etc. The master artist would be the primary ‘creator’ of the work. Andy Warhol’s Factory is one famous example. There were lots of people hanging around and a group of key people working with Andy to help produce his mass produced looking pieces. Yet this is nothing compared to what Koons has and clearly from how he speaks, he embraces this fully.

The assistants in his studio do everything. They are the fabricators. They are the painters. They are the producers of each and every piece. Koons is the master project manager and, as I am, the computer geek who designs his work for mass production by his team.

It’s an interesting thing to watch and a compelling argument, up to a point, for what I wrote in an earlier blog article about Duchamp and the artist’s idea. Koons has taken this concept of Duchamp’s that, “whether (the artist) with his own hands made the (art) or not is of no importance. He CHOSE it.”, run it through the Warhol factory filter and amped it up to the highest volume. His factory is a real factory. It is on a scale that many, if not most, small to medium size factories owners would love to have. He is an entrepeneur in the truest sense, replete with a personal staff and employees up the ying yang. He makes certain, like in a good advertising agency, that all the t’s are crossed and i’s are dotted. The net result is the most elaborate structure possible to produce the most complex, pristine and grandiose tchotchke’s know in recent history. And yet, there is a model for him, Peter Paul Rubens.

In so very many ways (though not some of the most important ones in my opinion) he is for our time what Peter Paul Rubens was to the high Baroque. For starters, Rubens had an enormous production studio. Through I haven’t found specifics, it seems likely to have been the equivalent of Koons’ only for the 17th century. And Koons is the 21st century’s example of neo-baroque or baroque-co-co. I had missed this aspect of his work all along and yet when seen through that lens, it becomes crystal clear.

From his earliest works which one might say are sublime but certainly understated, such as the hoovers in vitrines and the basketballs in fish tanks, to today’s “Puppy”, he has increasingly channeled Rubens’ baroque approach and the collectors and audience can’t get enough of it. Like so much of Ruben’s output, the grandiosity of it is mind-numbing, and incredibly pointless much of the time. The ‘trick’ of Koons, taking toys or quotidian objects of play, blowing them up, casting them in some antithetical material (plastic balloons become stainless steel) is mostly a one note song. Yet like so much ‘monumental’ work of his, it plays to our fears and inadequacies by out-scaling us and thus impresses. And like Rubens, who himself took scale to new heights, the technical aspects of the work are accomplished to say the least, thanks to the raft of ‘assistants’.

But what of the ‘assistants’? I’m sure they’re all very happy to have their salaried positions, assuming that the Great Recession hasn’t robbed them of that, like so many ordinary factory workers. If we remove the incredible talent of the assistants and we look at these works as visual art ideas in and of themselves, what’s there? Not a whole lot. The sublime cultural commentaries that were possibly in evidence early on have long ago disappeared.

Koons is mightily clever and clever is the key to success in the artworld today . Yet it doesn’t hold much water when you consider it. The one time I spent more than a few moments in front of the Marie DeMedici cycle of Rubens in the Louvre I was both blown away and disgusted. They are gigantic wedding cakes of paint and color and movement without much to really relate to. And so it is with Koons. A ‘wow’ effect, followed by a, ‘well, now what?’ I deeply admire his entrepreneurial skills and they are evident in his spot on ART:21. I wish I had half that much hutzpah and self-confidence. I also owe him a debt of gratitude because his lead allows me to do things that I would have had a hard time justifying previously.

So, all hail the neo-baroque and it’s over the top scale though frankly I’m looking forward to the follow up. If it’s anything like what happened after Rubens, which was Rembrandt, whoever it is will be a revelation.