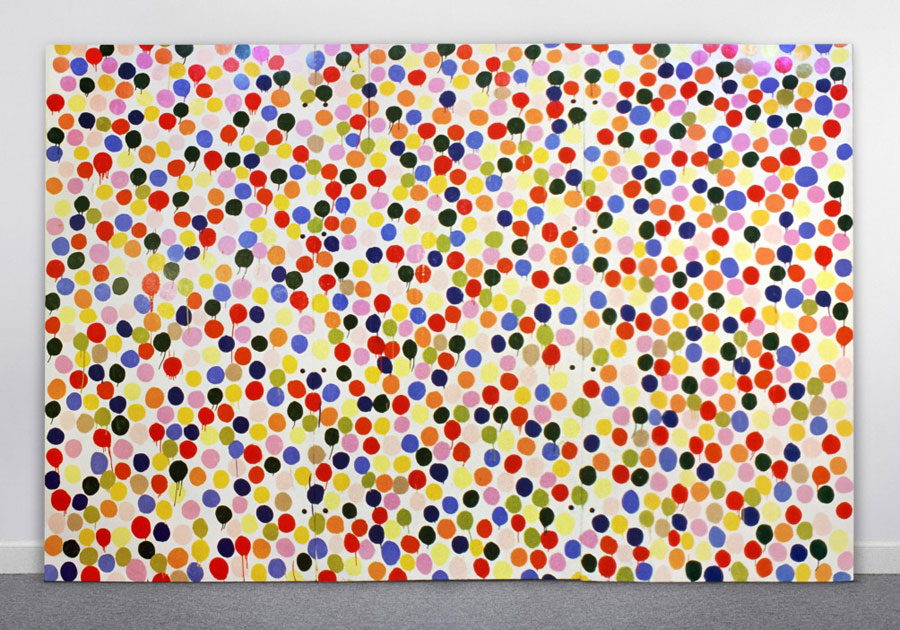 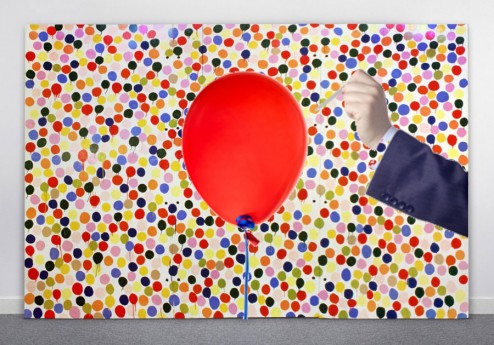 “On one level, the Hirst à Gogo is a blatant promotion of both the Hirst and Gagosian brands, and a sitting-duck symbol of the end-time, we’re-doing-this-because-we-can decadence that has subsumed so much of the art world — yet another instance of money celebrating itself.”
Excerpted from Roberta Smith’s review, “Hirst, Globally dotting his “I”, New York Times.

So states Roberta Smith, the long-time New York Times art critic, who, over the years has been lauded and reviled for her opinions, of the Damien Hirst extravaganza at the Gagosian Galleries worldwide. By the way, she goes on to say some good things about some of his work as well, but I’m convinced it’s because she ‘has’ to. I mean, she writes for the NY Times. They don’t like people trashing their advertisers too much, sadly.

This art review is the second recent review where I’ve seen a well known critic openly deride the state of the art world in a meaningful and considered discussion of someone’s work. In December in the NY Times, Holland Cotter wrote an amazing article, “Complacency Butts Up Against Game Changers“, that states, “The physical distance between Lower Manhattan and the Chelsea art zone is short, but the mental and moral gap felt immeasurable. The park was about light-on-its-feet, change-the-game politics. Chelsea — leaden and inbred — was about cash and caution.” THANK YOU!!! It’s about time. I guess because I don’t make my living from that decaying disaster of an industry – and make no mistakes, an industry it is – what she and others are finally saying has been apparent for quite some time. Whatever one thinks of the artworld or of the art that’s been and being created, it has seriously lost its way.

[pullquote author=”Holland Cotter”]The physical distance between Lower Manhattan and the Chelsea art zone is short, but the mental and moral gap felt immeasurable. Chelsea — leaden and inbred — was about cash and caution. [/pullquote]

In the quest for cultural, or at least artistic, dominance, the entire process has become a sham of lackluster or worse creativity supported by millionaires with limited or no taste and mega mansions to fill. And there are so many so-called artists waiting in line to fill that need. It’s almost impossible to find artists, these days, whose work is speaking about something more significant or pertinent than how to make as many highly polished objet d’art as possible.

The one thing that everyone has learned, with the help of the housing industry of the 21st century and shows on HG tv is that the finishes are all important. Who gives a damn what it’s about just as long as it ‘looks’ expensive. The materials and scale are far more important than the content. In fact, what content? Narrative? Intent? Anything other than as Ms. Smith states of Mr. Hirst, “He’s so unimaginative, so crassly commercial, not a real artist and so forth. Mr. Hirst is the post-Warhol, post-Barnum epitome of the artist as impresario, public relations strategist, graphic designer and art director. ”

What she says here of Mr. Hirst is true of almost every graduate art history student these days. The reason for choosing a school to go to for fine art has become the same as for getting an MBA – who you can meet and whether their personal connections can get you ‘in’ with the right people. For a real treat, you must go to see this video, “Hennesy Youngman on Damien Hirst“. It’s a rap and a rant but the best of it is at the end, and says it all directly from the mouth of Mr. Hirst himself. Worth the view.

How very sad, but completely in keeping with the end of empire state that the US finds itself in. We all running for the last life boats as the ship of state is sinking. No better way to ensure safety than surround yourself with and ultimately grab hold of oodles of cash so as to board the first plane to safety as this island finally succumbs.

It’s a pathetic and debilitating vision of our state of affairs but there is an honesty in it. It is certainly more honest than the views being promulgated by the Republican candidates for president – current and recently removed. The dishonesty and complete disregard for the rest of the population in an effort to gain notoriety, and possibly fame and fortune, prove the extent to which we, as a country, are fading. No person running for president of a country that is still at its apex needs to resort to the level of pandering and abject lying that is happening.

The same is true for an artworld that is desperate to keep the party going while the Titanic sinks. We can all pretend that what’s being offered has any real value over and above its sale price but it is certainly a case of “emperor’s new clothes” and we know it.

So, let’s raise a glass to the end of empire! Let’s toast out loud the last big parties before the doors are bolted shut! Like the final days of the great nightclubs, the Saint and Roxy, those last parties were in some ways the best because everyone was living on piped in oxygen hoping the tank wouldn’t run out.

The big question, of course, is where does it go from here? What’s next? In a world that is screeching toward the clash of extremes, it’s anyone’s guess. My approach is to work from a place of honesty. As much as possible, I want my work to be representative of real truth and ideal concepts. These two seemingly divergent points on the spectrum are, in fact, the two things that offer the greatest options – the quest for what is real and true in and amongst all the temporal and reactionary balanced by an understanding that ideals are there for a reason – they inspire us to be more than we would otherwise. Cynicism in the name of ‘newness’ is only driving the wedge between us and what makes us great deeper and deeper.

As we think about how to manage ourselves in this new (art) world that is bubbling up from underneath, it is important to point out that there are others from within the ‘system’ who have a vision and are working to make it a better place. A few of these are:

There are lots of us out there. Go seek them out and herald them for the world to see!